Lake Champlain was the route for a number of military vessels during historic battles fought along the New York and Vermont borders. Fort Ticonderoga in New York and Crown Point are probably the best know forts still standing.

To reach the site, take Route 73 west from Orwell and take the first left turn. This is a paved town road that forks; take the right fork. The road will turn to gravel and go parallel to Lake Champlain. Once again the road will fork; take a sharp left hand turn towards a small marina. The parking lot for the historic site is on the left at the top of the hill. 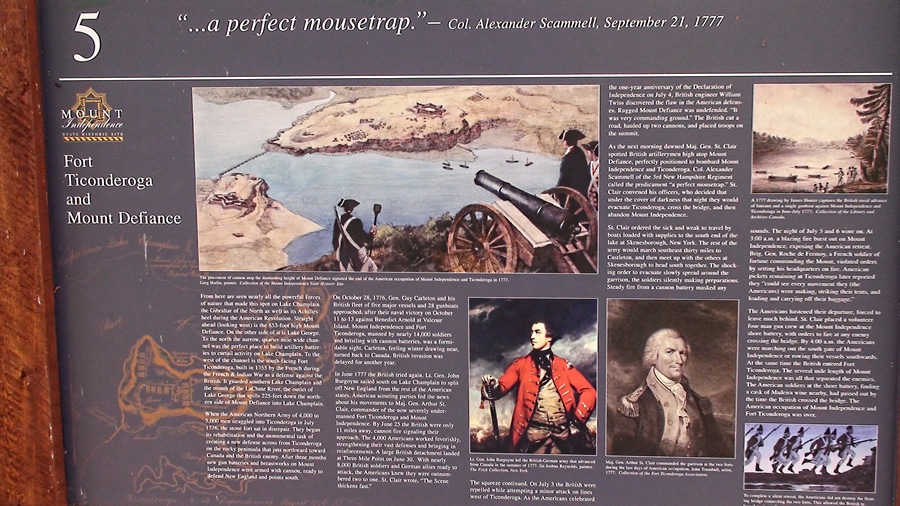 This an exciting trip in itself and well worth the visit. Best of all, you can view the panoramic splendor of Fort Ticonderoga from a lookout point at Mount Independence.

The Battle of Hubbardton was an engagement in the Saratoga campaign of the American Revolutionary War. On the morning of July 7, 1777, British forces, under General Simon Fraser, caught up with the American rear guard of the forces withdrawing from Fort Ticonderoga. It was the only battle of the revolution fought on Vermont soil.
Directions: 5696 Monument Road, Hubbardton, VT
The site is located in East Hubbardton, 7 miles north of U.S. Route 4 from Castleton.
(802) 759-2412 – During open hours call: (802) 273-2282
E-mail: [email protected]

The Ethan Allen monument honors one of the founding fathers of Vermont and leader of the Green Mountain Boys, who represented the state as soldiers in the American Revolution. The 35-foot column with the 8-foot statue of Allen on top makes the monument the tallest and most prominent in the state. No one really knows for sure where Ethan Allen is buried but he is not interred below the monument.
Directions: 455 North Ave., Burlington, VT 05401

One of the Oldest Log Cabins in the USA

Built circa 1783, the Hyde Log Cabin, located in Grand Isle, VT, was one of the first buildings constructed in the area and also rumored to be one of the oldest log cabins in the USA. The cabin is located just past the Grand Isle Elementary School on the right. Directions can be found here.

The tallest structure in Vermont commemorates the Battle of Bennington, a battle that lead to the turning point in the Revolutionary War.
Directions: 15 Monument Circle, Bennington, VT 05201
Bennington is centered around the junction of US Route 7 and State Route 9 in the southwest corner of Vermont. The Bennington Battle Monument is located at t he head of Monument Avenue on Monument Circle. From the center of Bennington, take West Main Street (State Route 9) going up the hill past the Bennington Museum. At the Old First Church, take a sharp right on to Monument Avenue; the Monument is straight ahead.
Tickets are available at the Gift Shop
Bus tours are welcomed with prior reservations

Vermont history for all ages to enjoy

The first constitution in America to prohibit slavery, allow men to vote without requiring property ownership, and authorize a public school system was adopted here in Windsor, Vermont in 1777.
Directions: 16 North Main Street, Windsor, VT 05089
The Old Constitution House is located on Main Street at the northern end of the village of Windsor on U.S. Route 5, between exits 8 and 9 on Interstate 91.
For group (15 or more) reservations, telephone (802) 672-3773

Rokeby Museum is a historic farm property and museum at 4334 United States Route 7 in Ferrisburgh, Vermont. The 90-acre property includes a 1780s farmstead, and eight agricultural outbuildings with permanent exhibits. Hiking trails cover more than 50 acres of the grounds.

Dr. Jones served as a representative to the Vermont Legislature. In 1784 the first meeting of the proprietors was held at the inn of Jehial Webb in Rockingham to make plans to view and lay […]

A full photo gallery is also available to complement this article.Thank you for reading this post, don’t forget to subscribe to our email list for the latest news! Little River State Park is a Vermont State Park […]