Are there actually ghosts walking the halls of the Shelburne Farms Inn?

These are the questions that many of us would like to know.

This snippet from Robert Egger’s blog post on June 12, 2006, certainly sounds similar to other stories that abound:

“…here we were talking about keeping it local and supporting small farms and the Vanderbilt’s built this “farm” after they bought out something like 30 small farms. Irony sure is interesting, isn’t it??? Here we are singing the praises of small, and we spent the entire week in the equivalent of a 1890’s giant agri-business.”

“But the wild card of the week was the ghost that occupied my room!!!!! Now…many folks feign interest or even seek out haunted rooms. NOT ME….and I’ve got to tell you that when I learned that mine was indeed one of the two rooms that featured “other-world” additives it took all of my concentration to NOT whimper like a child and call out for my Momma. You could sure make a case that I heard the hangers in my closet rustle, or saw the blinds in my bathroom move ONLY because it was suggested, but I wasn’t about to wait around to see, or not be seen again.”

After contacting Robert, here is what he had to say to summarize the experience:

“Well….I could never tell whether it was my hyper-active imagination, but I could swear that I heard noises from the closet, including hangers moving….and I also swear I saw a window blind move, like it was being pulled. I actually left the room modestly spooked….no pun intended.” 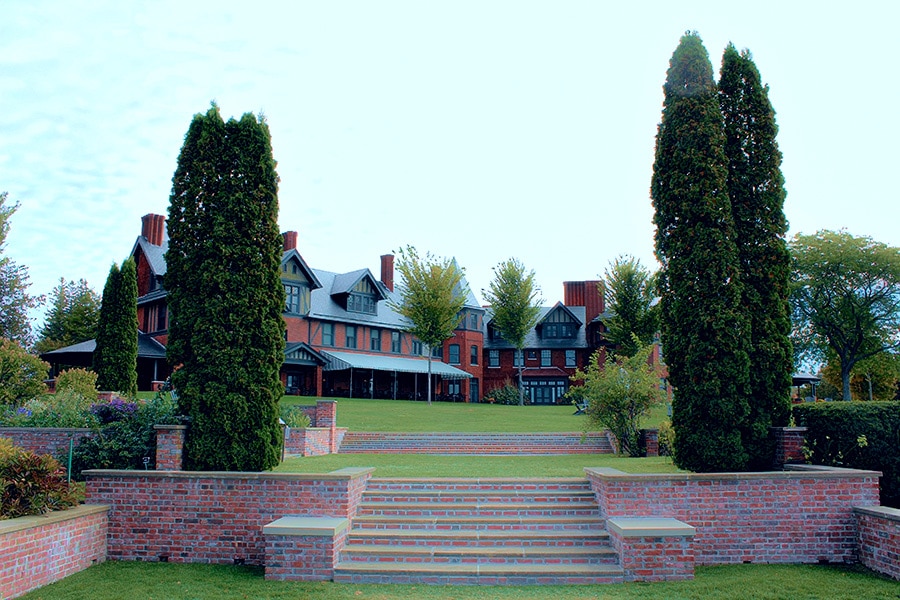 “I spoke with a few people in Shelburne village about ghosts or haunted places at Shelburne Farms. It seems to be a topic that many would prefer to avoid or may simply aren’t aware of”

But one intriguing conversation with a local Shelburne business owner, unearthed this little gem:

“It wouldn’t surprise me a bit if there weren’t a lot of ghosts and haunted areas on the grounds. I heard some things about the way the land was acquired. It didn’t all happen in such a nice way, as most people believe. There is even some talk of the Inn being built over graves. Not sure if it’s a fact, but I wouldn’t be surprised. A lot of white-washing going on, even to this day”

Another highly respected Shelburne business person also confirmed a haunting at the Shelburne Farms Inn. “I know someone who was a chef at the Inn and there are definitely ghosts there…at least 3 of them, for certain”

When asked how I could confirm that or find out more, I was pointed towards the town offices and Shelburne Historical Society. Even though I had good connections at both places, neither yielded much information.

Are there ghosts of children playing at the Shelburne Farms Inn?

One highly trusted ghost authority mentioned that he had heard that the hired help at the Inn were sworn to secrecy in regards to any paranormal activity at the Inn. As a matter of fact, the rumor is that they have internal meetings about any such sightings that are NOT to be mentioned to the public. Yet, inquiring minds want to know!

Allegedly, ghost children have been scene playing ball in the hallway, at night by front desk clerks

I have explored the Inn myself, several times and have never seen anything out of the ordinary. However, I’ve never been there at night so maybe things change after the sun goes down.

An inquiry at the Shelburne Farms gift shop, regarding ghosts at the Inn or at the “Brick House“, resulted in a terse reply of “NO, certainly not. We don’t have any of that kind of nonsense here.” Yet, the rumors remain.

In their defense, a “haunted inn” is probably something they would prefer not to be associated with. From a business perspective, it’s probably a wise strategy. It’s doubtful that the Inn’s management are interested in attracting “ghost hunters” and Scooby Doo/Mystery Van types, preferring a bit “less enthusiastic” clientele instead.

I asked about the location of the old cemetery on the grounds of Shelburne Farms, but the person at the gift shop said it was private and the public was not allowed there. Fortunately, as I was walking out of the gift shop, a stranger pulled me aside and showed me a map. She pointed out where the cemetery was and said that people can indeed visit if they wish. The day was very cold and windy, so I put it off for another time and came back the following week.

When I drove in and checked at the gate, the attendant let me pass without an issue. He even confirmed directions to the cemetery and suggested that I drive all the way to it rather than park and walk, because of the cold wind. When I arrived at the cemetery, I was surprised to see that it was larger than I envisioned. Curiously, the Webb family graves were sectioned off from the rest of the cemetery.

“I worked at The Best organic bakery located at Shelburne Farms after I graduated from NECI.
Once everyone had left for day and the sun set. The barn took on a different feel. Not ominous but it always felt like there were others there making sure I was taking care of business. Watching over me because I think they felt I was also the hired help. Like them. Odd noises. I knew I was the only one there and as I walked up through the barn to my Jeep, more than a few nights I heard footsteps with me. Waking behind me, Making sure I got out safely. Unnerving but not “scary.”
Once or twice I saw a dim orange light after I’d gotten into the Jeep floating through the barn. In places I knew there were no floors to walk on. I sat and watched it both times until it faded out to make sure it wasn’t an actual human. Then I’d drive out front to recheck the bakery. Never a human anywhere.
You work somewhere a long time “they” get to know you.
I will say I locked my doors after dark driving out the years I worked there. Not that locked doors can keep them out. Lol
The road was creepy as hell. My friendly ones definitely stayed near the barn. I don’t know why but I always felt like something was strange. Flight or fight instinct kicked in. And I was on my own as far as ghostly protection.
Once I made it out to the road I breathed a sigh of relief.
The whole of the farm has a lot of history.
I loved the Big house. I never had bad “feels” there.
But one house on the property was also creepy, sad to drive or walk by. Even in broad daylight with the sun out.
I won’t say which one.
Haunted or not I always try to visit the farm when I visit back home.”

This article is an ongoing work in progress. We’d love to add more stories of folklore, ghosts or fascinating historical info about Shelburne Farms to this post. If anyone has any stories or info, please let us know.

Below is a photo gallery of the Shelburne Farms Cemetery

Photo gallery of the Webb family section of the cemetery

Vermont ghost stories, and haunted locations you can explore… The following are 13 scary locations in Vermont that might haunt you for days (or even years) to come. Each one of these creepy places are […]

The Glastenbury area of Southern Vermont has been the subject of mysterious disappearances and odd occurrences for many years. The so-called “Bennington Triangle” is a phrase created by New England author Joseph A. Citro during […]

A vampire’s heart burned on the Woodstock, VT village green? Maybe. There is a well known legend that suggests that in 1834 the eldest son of the Corwin family of Woodstock, VT died from a […]