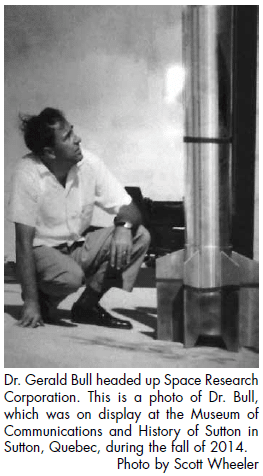 Space Research Corporation (SRC) was a somewhat curiosity for local Vermonters living in the Jay and Troy, VT area back in the 1970’s. While most everyone in the area knew that there was some type of artillery testing, deep in the northern Vermont hills, the people that actually worked there, didn’t reveal many secrets. All of this just served to add even more of a mysterious shroud over the project.

Dr, Gerald Bull headed up SRC on a 6,000-acre tract of land that straddles the international border at Jay, Vermont, and Highwater, Quebec. A wide array of munitions—long range artillery shells and big guns and cannons capable of delivering their deadly cargo with pinpoint accuracy—were developed and produced there and sold around the world. What many people don’t know, however, is that SRC also conducted research and developed technology for many peaceful purposes, including for space missions, and to help air traffic controllers better do their jobs at airports around the world.

Fast forward to 1979, Dr. Bull and some of his associates found themselves under the scrutiny of the U.S. Government, accused of illegally shipping arms to South Africa in violation of a U.S. and United Nations embargo on such activities. Dr. Bull’s life in the U.S. began to crumble. This led to a series of events and problems that Dr. Bull could not overcome. Eventually, Dr. Bull’s life came to a violent end on March 20, 1990, in Brussels, when an assassin, or assassins, shot him at close range.

The first in a series, this fascinating article contains never before revealed facts, photos and information provided by one of Dr. Bull’s high level associates.  Subscribe to the print publication or online edition to read the full story.

Will That Be One Hump or Two? Thank you for reading this post, don’t forget to subscribe to our email list for the latest news! The last thing anyone driving along scenic Route 7 in […]

Built circa 1783, the Hyde Log Cabin, located in Grand Isle, VT, was one of the first buildings constructed in the area. Thank you for reading this post, don’t forget to subscribe to our email […]

These are the voyages… I grew up watching TV westerns, thanks to my grandfather. When most people can’t remember anything beyond their recent past, I can clearly recall being held as a baby, learning to […]