If you love the original Star Trek TV show, this is one fantastic tour you simply can’t miss 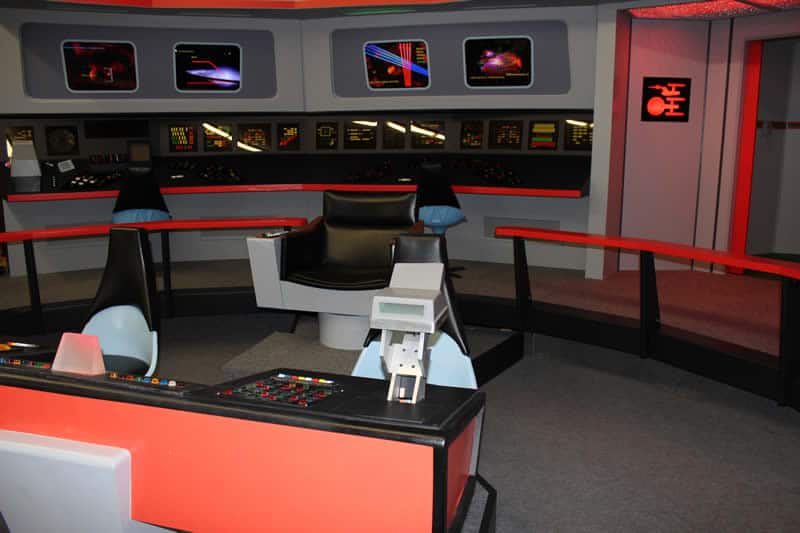 Many of us grew up in the 1960’s glued to our TV sets, watching such wonderful shows as Star Trek. As they say, they simply don’t make them like that anymore. Although there have been many versions of Star Trek during the past 50 years, none of them hold a candle to the original series, from which they are based on.

Star Trek was a low budget show back in the 60’s. The film crew often had to scrounge for common materials and adapt them to look 23rd century in appearance. The “creatures” and aliens on the show were only a slight improvement over the tacky versions appearing on Irwin Allen’s memorable Lost In Space series.

What made Star Trek special was the characters and stories, which often superseded corny dialog and budgetary limitations. For some reason, we simply believed – and perhaps that is why much of what we could only imagine on Star Trek is a reality today. Our current mobile phones originated from the concept of Star Trek’s communicator.

Star Trek showed us what could be accomplished and future scientists and engineers have made much of it a reality, far ahead of the 23rd century.

I was an avid fan all through my childhood, high school years and for some time afterwards. In the 1990’s, I started a business that revolved around selling at Star Trek conventions and events. My first convention, as a collectibles dealer, was at the Sheraton in Burlington, VT. This was decided upon after visiting a convention in Manchester, NH, the year before. I was looking for a hobby business tax shelter, and this was perfect!

The first Star Trek personality I ever met was James “Scotty” Doohan in 1980, in St Johnsbury, VT of all places. I didn’t realize that over the coming years, I’d run into him several more times to the point where we casually knew each other, enough to share “Shatner jokes”.

Walter (Chekov) Koenig was a nice guy and collector of Big, Little Books. I used two watch for the rare books and sell to him on occasion. Majel “Nurse Chapel” Barrett, wife of Star Trek creator Gene Roddenberry, was one of the nicest, most charming celebrities, I have ever met. Second only to my dear, late friend from Lost In Space, Jonathan Harris.

Unfortunately, I never had the opportunity to meet Leonard Nimoy or DeForest Kelley (Dr McCoy), but I would have loved to.

After selling at conventions for several years, the “wow” factor began to wear off

I did get to see a lot of “back stage” scenarios that the public didn’t, and probably wouldn’t care to. Whiny actor attitudes, complaints and conceited behavior, etc. I had a particular disinterest with a couple of the Star Trek Next Generation actors. I didn’t go out of my way to meet or interact with them. Ironically, they’re same people you might read about in the “where are they now” articles.

At one convention at the Hynes Center in Boston, I took a few minutes away from my display tables to listen to William Shatner talk. I was surprise to see that he was shorter than I imagined, with a bit of a pot belly. I was leaning against the wall and accidentally turned off the lights on him. He started to panic for some reason which was oddly not very “Kirk like”, at all. I simply said “sorry” and went back to my table. I didn’t bother to go for an autograph but an artist friend of mine did. He said that Mr. Shatner appeared to be a little inebriated while signing.

After a couple more shows, I was burned out on Star Trek and decided to call it quits

At some point, it just stopped being fun. Paramount licensing was pushing out small dealers in favor of big names like Kay Bee Toys, etc. I sold out all of my collectibles and just kept a few items, which I still have today. I didn’t even bother to watch any of the new incarnations of Star Trek, until just a couple years ago. I still wasn’t excited. Maybe I had finally outgrown Star Trek? 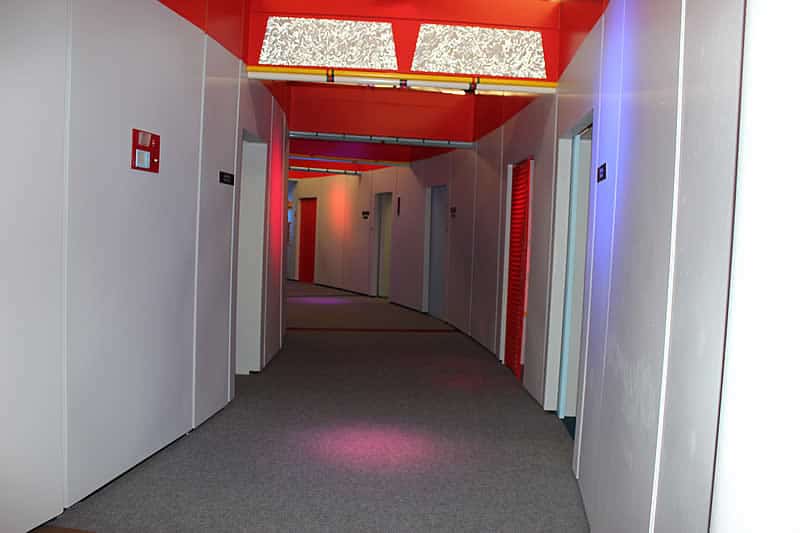 The 2009 Star Trek movie changed everything

I have to admit that the new movie, based on the original Star Trek was like a breath of fresh air. It was exciting and fun. The addition of Leonard Nimoy, made it even better. I was hooked again and taking a reminiscent look at Star Trek of old.

Years ago, I stumbled across the fan films that were being produced for YouTube, etc. but never could “get into” them. I was surprised to learn that some of the first ones were produced in Ticonderoga, NY, which is less than 2 hours from where I live. Again, it was a mild curiosity but a recent trip to Fort Ticonderoga didn’t even bring up thoughts that Star Trek “shows” were being produced in the small upstate New York community.

Last weekend, my wife and I were trying to find something to do on a gorgeous Sunday morning. Tired of the same old haunts like Stowe, VT., nearby New Hampshire and other short treks (excuse the pun), I searched the web for Lake Placid, NY. Somehow, I was diverted into something about a Star Trek tour, with a visit of the USS Enterprise sets. I went to the website and it peaked my interest.

Who could pass up the chance to visit the Starship Enterprise Bridge?

After all, what kid brought up on Star Trek could ever pass up a visit to the iconic “bridge” where Kirk kissed alien women, McCoy went mad and Sulu brought a sword to the party? Yeah, I had to check it out! 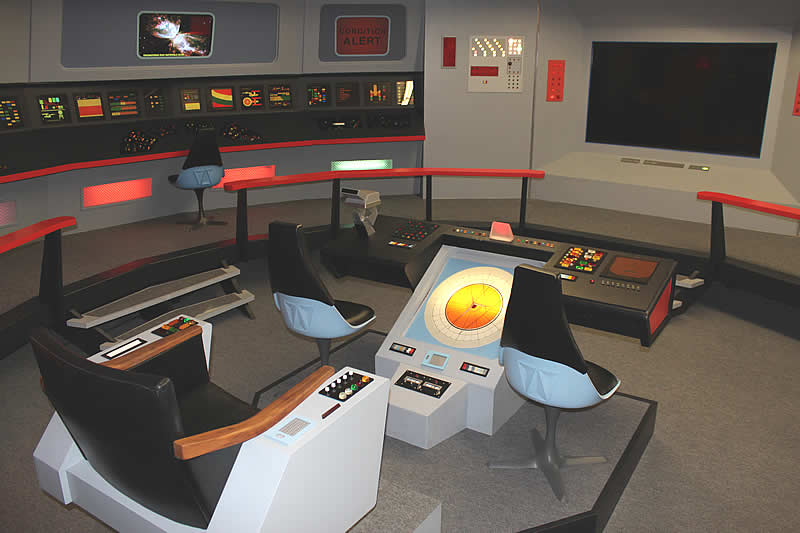 Fort Ticonderoga is one of my favorite area “go to” places and the drive from Vermont is simply beautiful. What a perfect day for a drive.

It’s easy to find in the center of town, located in a building that used to host a “dollar store”. Check out the video below to see the location:

We arrived around noon on Sunday and there were a handful of people taking the tour. James Cawley, the man who created the Star Trek Tour, was at the door to greet visitors and sell tickets. He’s a really nice, friendly guy who puts a lot of energy and passion into his project.

Admission is extremely reasonable and affordable for all ages. James mentioned that people come from around the world to experience the Star Trek tour. While we were there, a group from Asia were enjoying the tour.

As a former intern with Star Trek the Next Generation, James had access to a lot of Star Trek resources that most people do not. His is the most accurate Star Trek set interpretation in existence, utilizing some of the original props and people from the classic Star Trek TV show. The set is almost exactly as the original Star Trek series set was, in 1966, at the “Desilu” (now Paramount Pictures) Stage 9 in Hollywood.

Take all the photos you wish

The tour guides were very accommodating and encourage you to take as many photos as you wish. Yes, you can even sit in the captain’s chair on the bridge! The only gripe I would have is the Kirk cardboard standee. It would have made for better photos without it, but that’s a minor issue. The Star Trek tour was a hit and I’ll be back next Spring with a better video camera. The video I created for this article was shot with an iPhone.

Join Jack LaDuke of Mountain Lake PBS for his tour of the fabled Starship Enterprise:

The third film in KCP’s Vermont Mosher trilogy… After more than five years in development, we’re delighted to present Disappearances, the third in our trilogy of Vermont “frontier films” now in its final stages. Bolstered […]

On April 4, 2007 Lindsey Buckingham played in concert, in a packed house, at the Flynn Center in Burlington, VT. I was lucky enough to have front row center tickets, for his “Under the Skin” […]

As many of us long-time Vermonters know, the end of “fair season” in Vermont means shorter and cooler nights ahead. The hot and humid evening of summer seem like a distant memory. Even though much […]