The last place you would ever expect to find an 8000 year old mummy is within the rolling hills of Vermont. Middlebury, VT’s West Cemetery is the final resting place of an Egyptian Mummy.

This story’s origin starts in 1883 B.C., long before Vermont even existed 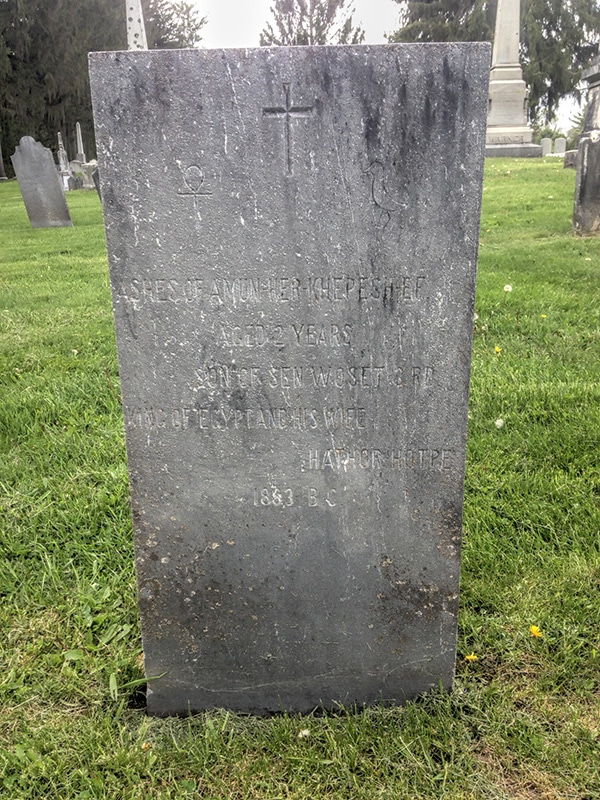 That ancient date, 1883 B.C., was when the young son of an Egyptian king, named Amun-Her-Khepesh-Ef passed away and was mummified for all of eternity. The mummy was the infant son of Sen Woset III, King of Egypt, and his wife Hathornhotpe.

How did an Egyptian mummy prince end up interred in a small town in Vermont?

Oddly enough, that is where the young mummy now rests in peace, Middlebury, VT. Rumor is that a local junk dealer, named Henry Sheldon, purchased the mummy from a New York antique dealer in 1866. He kept the mummy in his own house, along with a large collection of junk and trinkets (which eventually became a museum of sorts) until he died in 1907.

Final resting place for the son of an Egyptian King

The mummy was exposed to heat and cold, dry conditions and dampness. Its wrappings were decaying and the embalming process caused the body to begin decomposing. The thought of a person left to rot in a Vermont attic was appalling to George W. Mead, a Sheldon Museum trustee. Mead wanted to give the boy, believed to be linked to Egyptian royalty, a proper burial. So Mead had little Amun-Her Khepesh-Ef cremated and buried with his very own tombstone, within the Mead family plot.

The Egyptian prince’s grave stone is engraved with his name, the names of his royal parents and the date, 1883 B.C. In addition to the inscription, the stone carries three symbols, two of which are Egyptian for life and immortality. A Christian cross is inscribed between the two Egyptian symbols, perhaps reflecting the Christian burial services provided by the kindness of George Mead.

What is the Green Mountain National Forest? It’s a beautiful national forest that spans across 400,000 acres of land located in southwestern and central Vermont, located in Bennington, Addison, Rutland, Windham, Windsor, and Washington counties. […]

According to the Barre Daily Times of October 5, 1903: “Elia Corti was shot in the stomach and mortally wounded at a meeting in the Socialist building on Granite Street.Thank you for reading this post, […]

The Legend of “Boots Berry” a Stowe, Vermont Ghost Story Any self respecting Vermont Inn has a resident ghost or two. The Green Mountain Inn located in Stowe is no exception. As a matter of […]