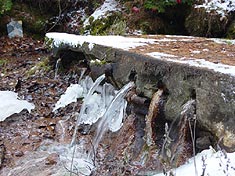 Ripley’s Believe it or Not called Brunswick Springs the “Eighth Wonder of the World” in 1984.

To Abenaki American Indians, it is a sacred spot with natural healing powers.

Over the last two centuries, people with enterprising ideas have envisioned it as a place of business. Four hotel fires later, they were left to wonder: was it a coincidence that led to their failure, or the curse of Brunswick Springs?

Brunswick Springs is located well off the main road in Brunswick, VT., a town of approximately 100 residents in the Northeast Kingdom. There are six individual springs at the spot, and each allegedly contains a different mineral-iron, calcium, magnesium, sulfur, bromide and arsenic-that flow into the Connecticut River 65 feet below.

The Abenaki Indian curse of the Brunswick Springs

The story of the curse begins in 1748, when Abenakis lived near the springs and relied on the natural healing powers of the waters. When a soldier was wounded in the French and Indian War, his Abenaki companions brought him to Brunswick Springs.

The springs were called the “Eighth Wonder of the World” due to the belief that the springs from the same source split into six unique mineral waters.

“Legend has it that they brought him and put him under the springs, and lo and behold, he was cured,” says Beverly Kettle, a resident of North Stratford, N.H., a town just across the river. Kettle’s father, Henry Savage, built the last hotel that fell victim to fire.

The soldier supposedly returned to the springs after the war to bottle and sell the water, and Abenakis objected to the sale of something natural. In the struggle that ensued, legend has it that an Abenaki man and baby were killed. The child’s mother, a sorceress, is said to have cursed the springs. “Indians said anyone who tried to profit from the springs would fail,” says Brendan Whittaker, Brunswick resident and chairman of the town’s select board. He says the subsequent fires were caused either by “that curse, someone with a grudge or accidents.”

Hotels rise over the water

As stories of healing continued to spread, the area began to look like a gold mine at a time when mineral waters were used frequently by the upper classes in Europe.

Kettle says the first house was built on the hill above the springs in 1832. The first hotel, called the Brunswick Spring House, followed in 1860. An early hotel brochure boasts the “medicine waters of the Great Spirit” and “60 guest chambers piped with the water from Brunswick Springs.” The hotel stayed in business for several years.

From the hotel, on the crest of a hill, the view included the Connecticut River, the Green Mountains of Vermont, New Hampshire’s White Mountains, and Silver Lake, on which some say they have seen the ghost of the Sorceress.

Others say the lake is bottomless.

“In the 19th century, people would apparently take the train to North Stratford (N.H.), and then a horse and buggy in to the springs, to the ‘healing waters’ as they called them,” Whittaker says.

Are the Brunswick Springs of Vermont really cursed?

Dr. Rowell, a dentist, owned the hotel, and after he enlarged it in 1894, it burned to the ground.

He rebuilt shortly after the turn of the century and died in 1910. The land was sold to John Hutchins, who took over the hotel, then named Pine Crest Lodge. Three fires in three years soon aroused suspicion. Pine Crest Lodge burned in 1929, and Hutchins had two more hotels built on the land, in 1930 and 1931, before he gave up. Records list combustion of paint fumes in a storage room as the cause of one of the fires, but causes of the other two have never been determined.

“He thought it was a wonderful place,” says Kettle, remembering what her father thought of the last hotel that he built. “North Stratford used to have a lot of hotels because of the railroad, but that was one of the nicest.”

What remains of the Brunswick Springs hotel
A walk a quarter of a mile into the woods from Route 102 reveals Silver Lake first, now home to multiple beaver dams. Deer tracks cover the area after a recent snow. The ridge rises to the left, and a cement staircase, over a century old, can be climbed to the top, displaying a view across the Connecticut River.

Further in, another old staircase leads down to the springs, and visible on the embankment is an old, overturned springhouse. According to Whittaker, the small cement building is engraved with the names of several members of the Civilian Conservation Corps (CCC). The land around the springs served as a CCC site after the last fire in 1931.

Just past a clearing above the springs lay the remains of the 1931 hotel, a cement foundation and stairs leading down to a cellar. The place is still frequented and honored by Abenaki Indians, and they leave tokens of their appreciation and awe at the spot that is sacred to them.

In the video below, filmed in the 1930’s, Ken Baird and Leon Damen visit their camp at Notch Pond in Brunswick, Essex County, Vermont. They also visit the site of where the cursed Abenaki Indian Brunswick Springs in Vermont.

Many people that live near the springs still believe there is a strange feeling to the place:

…as two men hanged themselves in the area and one woman drove her car into the lake and drowned. Kettle says her brother found a man’s body in a tree when he was hunting for partridge in the area and, as a small child, she sneaked down to see it. “It made me sick,” she says.” He had hanged himself overlooking the lake.”

If any enterprising businessman today ignored the curse and still wanted to develop the land, he could not. The Abenaki people now own the land and curse or not, it will never see development. “The Abenakis in Swanton formed a non-profit organization 10 or 12 years ago called Wobanaki, Inc.,” Whittaker says. “They bought the land because it allegedly is a sacred spot for them.” Wobanaki, Inc. then sold the rights to develop the land, through an easement, to the Vermont Land Trust on Oct. 22.

“A conservation easement is the right to develop land,” says Kathleen O’Dell of the Vermont Land Trust. “It says that you can’t add more buildings to the land or have other business operations besides those that already exist. As a land trust, we legally say that that land can’t be developed again.”

There is no scientific proof of the healing power of the waters, or that there are even separate minerals in each spring. Whittaker says a state geologist from New Jersey tested the springs and found their mineral contents were not very different.

“If people want to believe the myth, and myth is not necessarily a bad word…, then fine. But scientifically, if you test the water, you’ll find there’s mostly sulfur dioxide, and its level is almost identical in each of the springs,” he says. Legend and lore, however, do not rely on proof, and Bill Boudle, of Brunswick, says he needs none.

“I’ve been drinking that water since 1945,” he says. “When I got out of the army, I went to work for the railroad and I hurt my back.” Boudle says he went to doctors, chiropractors and tried anything he could think of, but believes it was the water that eventually healed him.

“I’m telling you that stuff will heal. A lot of people use it,” he says…

“My back used to hurt so I’d cry, but that’s what did it: the Brunswick Springs.” Kettle says that when she was a child, an old man lived in a cabin near the springs and walked in every day to get water. “He lived to be 90-something, or close to it,” she remembers. “Maybe I need to go down there and start drinking that water.”

More about the Brunswick Mineral Springs:

The following images and newspaper clippings are provided, courtesy of Douglas Lloyd Buchholz, who was generous enough to allow us to use them here for you to enjoy. Please take a moment to visit his website and his own great article about the Brunswick Mineral Springs entitled The Reinvention of the Alleged Vermont and New Hampshire Abenakis.

Courtesy of Douglas Lloyd Buchholz
Note: These images are copyrighted and not authorized for use other than by express permission

Can Shelburne Farms Really be Haunted by Ghosts?

Lake Memphremagog Cruises are back! by Scott Wheeler or Vermont’s Northland Journal Thank you for reading this post, don’t forget to subscribe to our email list for the latest news! The captain and the first […]

Autumn 2011 has been wonderful and just a bit warmer than fall of last year. The Underhill Harvest Festival had one day of on and off showers but the following Sunday was cool but precipitation […]

Have you ever tried biking in Vermont? If not, you’re really missing out! We have so many great places to choose from and that doesn’t necessarily mean biking along the roadsides. There are a number […]